At the outbreak of the American Civil War thousands of outdated government flintlock shoulder arms were in storage in state and Federal armories throughout the South. The number of such arms, altered to percussion and pressed into service by the Confederacy, did not go unnoticed by many a Yankee certain that the new president of the Confederacy, once U. S. Senator, Jefferson Davis had exercised his pre- secession power as chairman of the U. S. Senate, Military Affairs Committee, then as U. S. Secretary of War to move the large cash of federal weapons south. Also suspect were the motives of Virginian, John B. Floyd, U.S. Secretary of War under President James Buchanan and soon to become a Confederate general, who had arms sent south out of northern U.S. armories. Among those arms were the U. S. Model 1817 muzzle loading flintlock ‘Common Rifle’ and the Hall’s Patent Model 1819 flintlock, breech loading rifle. Hard use and common discarding in the field in favor of battlefield captured Union arms, cut the survival rate of examples of such early Civil War conversions to nill save the rare attic found war trophy that somehow made it through.

This Maine attic recovery of a Confederate percussion conversion Mod. 1817 Common Rifle (so called in period references simply to differentiate the muzzleloader from the breech loading Hall) offers an example of the unsophisticated work which frequently defined these Southern conversions. This example remains as it was brought home by one of a number of Maine Civil War Veterans who’s war trophies once made Maine attics, barns and defunct country meeting halls fertile ground for the Civil War collector / historian. The weapon’s crudely fitted and blacksmith welded, make-do hammer is indicative of Confederate work and is augmented in this case by a scratch engraved notation barely discernable on the underside of the patchbox cover.

A native of Hannibal, Missouri (Founded by his father Moses Bates in 1819 and destined to become best known as the home town of author Mark Twain and as the setting of his Adventures of Tom Sawyer and Adventures of Huckleberry Finn ) Moses D. Bates Jr. enlisted on June 16, 1861 and was mustered in as a Corporal of Co. K, 4th Missouri Infantry. He was wounded and taken prisoner at Corinth, Mississippi on October 3, 1862. Paroled (date unknown) Corp. Bates returned to Co. M of his 4th Missouri regiment and was captured yet again at Vicksburg, Mississippi. As his earlier Co. K of the 4th Missouri was designated as the ‘Missouri Grays’ it is safe to assume his Common Rifle was lost when he was wounded and captured at Corinth. How Corp. Bates’s rifle came to Maine has been lost in time. 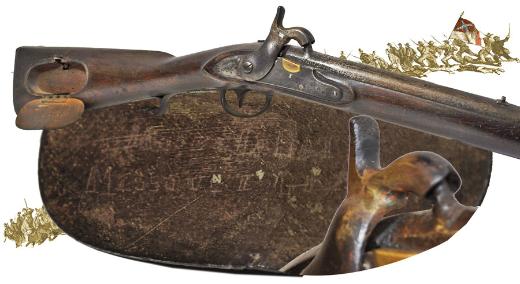