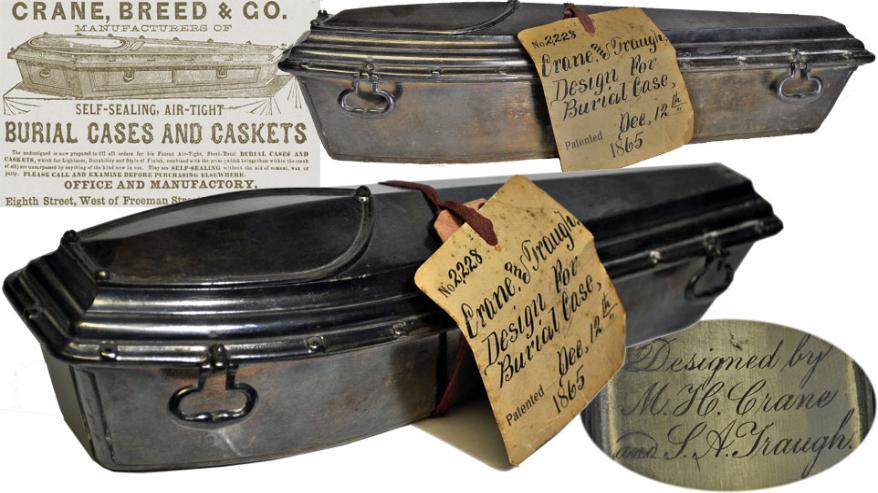 Illustrated above from the Hayes Family Collection is the original Patent model submitted in 1865 by Martin H. Crane and Samuel A. Traugh (listed in period directories as a foreman of Crane, Breed & Co) for an improved seamless, sealable coffin. The model retains its’ original U. S. Patent Office tag recording the award on Pat. 2228 . Company flyers touting the features of its newly designed casket advised:

The horrible loss of life inflicted as a result of the Civil War necessitated a revolution in the practical practices of the Undertaker / Embalmer. On the battlefield, upon the aftermath of battle, at hastily set field hospitals and at expansive U. S. Army General Hospitals, the challenge of maintaining traditional practice was exacerbated by the sheer numbers of fallen, distance from home and loved ones and slow communication. Additionally, sanitation and the control of disease under the most challenging of conditions necessitated change in Victorian burial and memorial practices. Temporary burial with simply made markers to facilitate later recovery became commonplace. Notification of family was frequently left to company officers who penned letters to mothers, fathers and unsuspecting wives. Words of comfort and location of burial would highlight a short letter that would frequently be followed by a more detailed account, sometimes including return of personal mementoes of the diseased. The more personal communication would most usually have come from a friend, a hometown mate who had entered and served with the diseased. As circumstances allowed, loved ones were frequently eager to recover remains for return home and reinterment in family burial grounds. This all led to development of more effective embalming techniques and radically innovative coffins. One of the larger and more progressive of burial case supply and development was Crane, Breed & Co. of Cincinnati, Ohio. In 1862, the Crane and Breed Company introduced a rectangular box-shaped casket which was chosen for the base for a much embellished casket chosen by the Chief Undertaker of President Lincoln’s burial in 1865.

A delay of days or weeks, awaiting the arrival of absent friends, is entirely practicable. When due attention is given in sealing, which may, with care, be accomplished by anyone . . . bodies may be carried to any part of the globe at any season of the year, with perfect safety.

The new sealing feature in combination with traditional Victorian era toe-pincher shape and removable viewing plate served the Crane & Breed Co. well as recovery of the fallen from burial grounds across the South continued in mass in the earliest post-Civil War period. 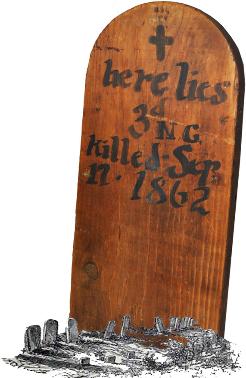 This hastily constructed marker identified the burial location of casualties of the 3rd North Carolina after the Battle of Antietam (Sharpsburg). It serves to remind us here that both Union and the Confederacy dearly paid the WAGES OF WAR. Less frequently able to properly care for their fallen, this marker for Confederate loss was likely placed by area citizens who in the aftermath tended to the gruesome service of caring for the dead . With a Confederate casualty total well in excess of 10,000, men lay unburied for days leading to additional losses of an untold number of local citizens from disease. The Adjutant of the devastated 3rd North Carolina later recorded that with five hundred and twenty of the Regiment engaged, only one hundred and ninety could be accounted for after the battle.