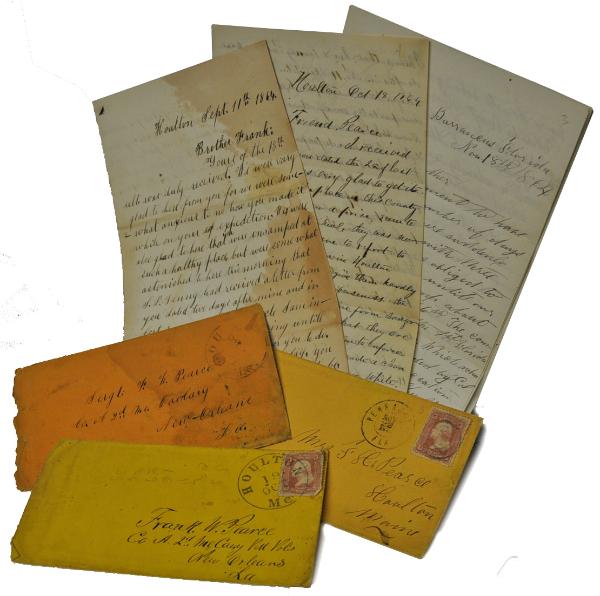 A bird’s eye view of Co. A Drilling on the double quick.

Three war time letters, one written to Sgt. Pearce by his brother Varney, one from a hometown buddy identified only as K and finally a letter home penned by the Sargent himself serving with the 2nd Maine Cavalry in Florida, offer a window on the times. Political and social opinions are strong and varied as expressed by a brother concerned about antiwar political influence, while friend K is clearly an outspoken Copperhead. Finally, Sgt. Pierce offers a dose of reality as he returns from a cavalry raid in which the unorthodox disguise of Union Cavalry in Confederate uniform is largely responsible for the success of a joint effort of 2nd Maine and 1st Florida Cavalries.

A Sept. 11,1864 letter to Sgt. Frank Pearce in New Orleans is from his brother Varney back in Houlton. He advises of the challenges on the Copperheads in local and state wide elections. Varney offers his delight that Union candidates have prevailed over the anti-war group. He asks to be remembered to Billie Read another Houlton boy (18 years of age) serving with the 2nd Cavalry. Tell Billie Read to shoot a Rebel for me if he gets a chance seeing as how I am too big a coward to shoot one for myself, writes brother Varney.

This letter is dated October 18, 1864 and is written by friend K home in Houlton to Sgt. Pearce in New Orleans. The Sargent had been a musician with K in the Houlton town band prior to earlier Civil War service with the 1st Maine Cavalry Band. Pierce’s friend has a keen political interest and frankly expressed opinion, offering insight into the impact of War and politics on service age Mainers. K has plenty to say about the draft. It seems the draft selection had taken place in Houlton the day before his letter was written and the Examining Board was due from Bangor the following day, those that drew a prize seem rather down at the heel, writes K. They was notified yesterday and are to report to the Examining Board in Houlton tomorrow. It does not give them hardly any time to fix up their business. K understands that the Examining Board will bring soldiers with them to enforce the draft. K lists off the names of several who in his mind have fallen victim. The draft has made a clean sweep in Houlton, he writes. Robert Grey* and Addison Russells** are [due] in any day. The band is practicing most every night for the funeral. K goes on to advise that Robert had just been commissioned Lt. Col. I understand he received it the day he met his death, was almost killed instantly by a shell. He writes that Addison was wounded in the knee. His leg was amputated quite snug to his body. He died two days after he was wounded. K continues his rant; I understand two men from Benden & Mulherrin’s Shop went out as substitutes about six weeks ago have both been killed. Looks rather hard to take men away from their families but I think this will not be the only draft before this War is ended. You go right in for Father Abraham but I can say as I do. I think he will be the next President, if he is elected I think the War will have but just begun. I had rather have the Union as it was than the amendment as they call it, writes K referring to the 13th Amendment. Little Mac is on the right path. I think he would be elected if the soldiers were allowed to vote with their own free will. Clearly a Copperhead at heart, K would be on relatively common ground in many Maine localities. The frequently encountered strongholds of antiwar Copperheads is a bit of an enigma when one considers the broad willingness of Maine citizens to sacrifice at the front and at home.
November 18, 1864 ,Sgt. Pearce writes home from the 2nd Maine Cavalry camp in Barrancas, Florida. The Sargent has just returned from a three day raid in which the 2nd Maine combined forces with the 1st Florida Cavalry all under the command of the 2nd Cav’s Col. Spurling who understands how to catch Rebels Pearce advises. We had a few from each company that had on Rebel uniforms. They were commanded by a Lieutenant belonging to the Florida Regiment. He was once a Lieutenant in the Rebel service.*** Pearce writes that the bogus Confederates took the lead and that on the second morning of the march the sham Rebels forward on the rest of the cavalry column came upon Confederate pickets. Our own Rebels captured the pickets without firing a shot, Frank writes. The Rebels did not mistrust but what it was their own men until they were ordered to lay down their arms and surrender. The 2nd Maine Cavalry Sargent advises that there were three groups of Confederate pickets all captured in the same manner before 9 AM which was the traditional time for relief by fresh pickets. The relieving Confederates were all successfully captured in the same fashion and without a shot fired. With all pickets quietly dispatched it was now time for the band of Union cavalry to move on the main Confederate camp which lay on the opposite side of a stream. Wide and deep enough to require a bridge, the mock Confederates were now forced to deal with Confederate guards posted at the little bridge. Our Rebs commenced going across, dismounting and leading their horses one at a time as the bridge was very poor, writes Pearce. Before successful crossing by all the disguised Union Cavalrymen they were found out and fired upon by Rebel guards. At this signal we were ordered to dismount and charge over the bridge which we did chasing them in every direction. We did not find so many of them as we expected. Six companies had left the day before leaving 60 men to do picket duty. We accomplished our object, advises Pierce. Took 38 of them and one 1st Lieutenant who commanded the camp. Got all of their arms, horses and burnt their camp and bridge and returned to our homes in Barrancas. All this was done without losing a man. It should be noted here that Col. Sperling’s report of this activity varies considerably from our Sargent’s private account to the folks at home. The most glaring differences are that the Colonel neglects to note that a portion of his command were outfitted in Confederate uniform. In his official account to superiors, Lt. Col Spurling does recognize the good work of Lt. Joseph Sanders, 1st Florida Cavalry and singles out Sgt. Frank Butler (see his forage cap further on) as one of two 2nd Maine Cavalry Sargents in the advance who were at all times brave, active and zealous in preforming their duties. Unorthodox to be sure but the Pierce account leaves little doubt that Lt. Sanders and his sham Confederates left little for Col. Spurling to accomplish. 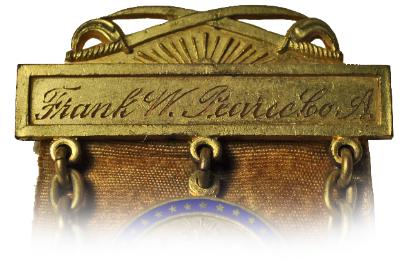 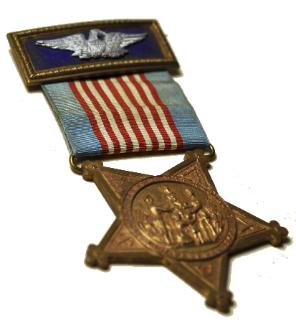 Corporal Ingersoll* as he appeared when being mustered in to U. S. Service.
(*Arthur J. Ingersoll, Co. A)

Frank Pearce’s Grand Army of the Republic medal sports the eagle suspension bar and blue ribbon of Post Commander. Pearce was an active member of the local Houlton, Maine, A. P. Russell G. A. R. Post 159. The Post was named in honor of Houlton native Adison P. Russell who enlisted in the 1st Maine Cavalry as Sgt. Major. Russell was promoted through the ranks to Captain before he was severely wounded at Petersburg, Virginia. Capt. Russell suffered amputation of his left leg lingering nearly four months before succumbing to his wounds.